Since its inception in 2013, The ONWARD Project has worked to create a storytelling platform using immersive, cutting-edge technology in virtual reality about the 1930’s Rainbow Bridge-Monument Valley Expedition (RBMVE) to the Southwest United States. The ONWARD Project has researched and assembled archival material from over 50 institutions and families. This work has shown that voices of peoples from Native communities in the region are largely absent from the official RBMVE historical records.

The ONWARD Project turns to the public in search of people with information, stories, or relationships to the Expedition and/or the area. With permission, these contributions will be incorporated into the greater storytelling project to better reflect the diverse perspectives surrounding the RBMVE and the landscape in which it took place. In order to inspire memories and knowledge, The ONWARD Project presents a selection of images of both Expedition participants and people from surrounding Native communities.* A majority of the images were taken during the RBMVE, c. 1933-1938. Additionally, some were taken by Expedition members returning to the area at a later date. 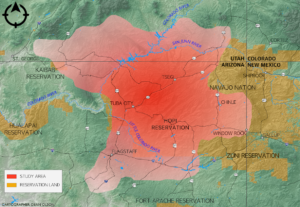 This website is an extension of community outreach conducted by The ONWARD Project over the last several years and in response to many suggestions that the photographs be made more widely accessible. After taking physical photographs to several events at Navajo Nation, a number of Native people in the photographs have been identified by their descendants. Viewers may find photos reflecting these interactions on this website, as they will appear to have been written on. However, a majority of the photographs of Native people taken by the RBMVE photographers remain unnamed and related stories untold.

Expedition members, both known and unknown, are also included in hopes of connecting with descendants. The lack of women Expedition members can be attributed to the fact that women were generally not permitted on the Expedition, with the exception of two: a pilot and a photographer, though it is known that women did apply.

*The ONWARD Project is posting material to THE ONWARD Project Stories Website in order to learn more about it. If you have privacy concerns about the material posted, please contact us.

The ONWARD Project does not have any political or religious affiliations.

This website, as well as The ONWARD Project’s work overall, would not be possible without the support and collaboration of: